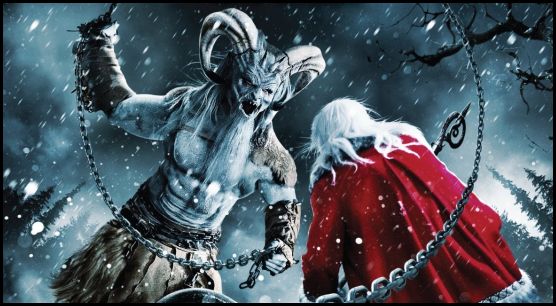 RLJ Entertainment gifts us a wonderfully horrific film experience this holiday season with "A Christmas Horror Story." Helmed by three different directors, the anthology movie brings to mind such classics of terror as "Tales from the Crypt," "Creepshow," "Trick 'r Treat," and the likes. William Shatner heads up a cast that dedicate themselves to a script that gives fans of yuletide horror and gore everything they could ever ask for.

It’s the season of joy, peace, and goodwill… unless you live in Bailey Downs. Last Christmas Eve, two teens came to a grisly end in a school basement. Now, one year later, a new set of horrors has come to town. As three friends explore the site of the massacre, a malevolent spirit is determined to keep them there forever. One of the first cops (Adrian Holmes) to the scene of the bloody murders has new complications as his seven-year-old son (Orion John) exhibits terrifying and violent behavior. And when a local family seeks reconciliation with an estranged aunt (Corinne Conley) for the wrong reasons, they suddenly find themselves running in terror from Krampus (Rob Archer), the demonic anti-Santa Claus. Not even St. Nick (George Buza) is immune to the terror as he fights back against a horde of zombie elves in "A Christmas Horror Story." This is destined to be a holiday no one will ever forget….

I really enjoyed "A Christmas Horror Story" up until the very end. A grizzled tough-guy Santa Claus decapitating foul-mouthed zombie elves and taking on Krampus in a battle royale sealed the deal for me. The other well-written and finely shot tales were the icing on the fruitcake. Having William Shatner be the wise old radio personality with a special Christmas lesson to be shared was the cherry on top.

The only real problem with "A Christmas Horror Story" is its twist ending undermines my favorite segment. All is not as it seems, which is usually a good thing. Unfortunately for me, it completely derailed what I was the most excited for in the film. The ending will most likely also be seen as distasteful by some in light of recent tragic events.

Although "A Christmas Horror Story" is listed as Unrated, it would most likely receive an R if put before the MPAA. It contains violence and gore, drinking, profanity, sexual situations, and intense and frightening scenes. Let's just say there's a lot of gore and elves literally losing their heads. A rather explicit and unnecessary sex scene is shown without any nudity.

The DVD version of "A Christmas Horror Story" provides viewers with a behind-the-scenes look into the making of the movie. It includes interviews with the cast and crew. We also get a peek at the filming process. The makeup effects are a focus of the featurette as well.

"A Christmas Horror Story" somehow brings together so many different elements from our favorite horror sub genres and makes them work together in one entertaining film. It's an incredible feat the filmmakers have achieved by putting together a murderous Santa Claus, Krampus, a supernatural entity ala "The Conjuring," a changeling, ravenous zombie elves, and St. Nick as an action movie hero. It's a jolly good time for all those who like a little darkness and gore during the holiday season.

"A Christmas Horror Story" is available now on Blu-ray, DVD, and as a Digital Download.