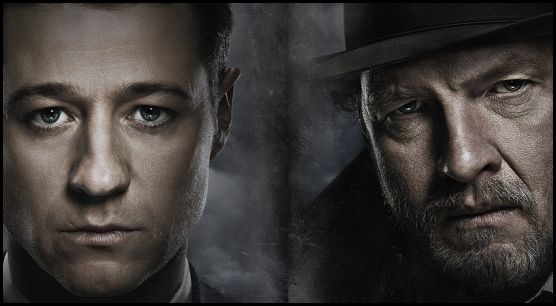 DC Entertainment and Warner Brothers Home Entertainment deliver “Gotham: The Complete First Season” on Blu-ray and DVD. All 22 episodes of the hit television series are included on four discs. Getting off to a rocky start, things started coming together after a few episodes and ended on a high note leaving viewers begging for more.

Jim Gordon is a rising detective in corrupt Gotham City, where his late father was a successful district attorney. Brave, honest and determined to prove himself, Jim hopes to return the city to the glamorous, purer version he remembers as a child. He and his partner, legendary Detective Harvey Bullock, must navigate the dirty politics of Gotham's justice system, even as they tackle a high-profile case, the murder of billionaires Thomas and Martha Wayne. Gordon becomes a friend to their young orphan, Bruce.

Each and every actor in “Gotham: The Complete First Season” is fully dedicated to bringing their specific character to life for the show. Robin-Lord Taylor steals the show with his sniveling-yet-sinister portrayal of Oswald Cobblepot, always scheming to get ahead in the world of organized crime. Jada Pinkett-Smith is glorious as gang boss Fish Mooney who is the picture of ice cold in demeanor and the perfect example of the phrase “the calm before the storm.” Benjamin McKenzie and Donal Logue are great as the odd couple detective team of Jim Gordon and Harvey Bullock, who constantly find themselves keeping each other out of danger and trouble.

Although “Gotham” is based in the city protected by Batman, the character of Bruce Wayne really felt rather shoehorned into the show at first. His appearances in the beginning felt forced and were an annoying distraction from the more interesting storylines featuring Gordon, Bullock, Penguin, and everyone else. Towards the end of Season One, this all changed and his appearances became a lot more fascinating.

The Blu-ray edition of “Gotham: The Complete First Season” is filled with exciting bonus material. They include four featurettes entitled “’Gotham’ Invented,” “’Gotham:’ Designing the Fiction,” “The Game of Cobblepot,” and “’Gotham:’ The Legend Reborn.” “DC Comics Night at Comic-Con 2014 – Presenting ‘Gotham,’ ‘The Flash,’ ‘Constantine,’ and ‘Arrow’” gives viewers a front row seat to the star-studded event. We also get Character profiles, a gag Reel, and Unaired Scenes.

Although it’s technically labeled Not Rated on the cover, “Gotham: The Complete First Season” would be considered PG-13 by movie standards. The show is filled with violence, gore, adult situations, sensuality, profanity, and frightening and intense scenes. The atmosphere of the series is very dark and definitely takes audiences into dark territory you could only run into in a city totally devoid of morality or any sense of integrity.

“Gotham: The Complete First Season” leaves me in a constant flux of emotions. For the most part, I absolutely love it and actually anticipate the next episode more than I do “Arrow” or “The Flash.” Another side of me smirks at how convenient it is that all of Batman’s villains somehow crossed paths as children or teens before becoming the iconic criminals they did. In the end, I choose to overlook these forced accessibilities and just enjoy the series for what it is - a police procedural set in the dark and damaged streets of Batman’s town.

“Gotham: The Complete First Season” is available now on Blu-ray and DVD.