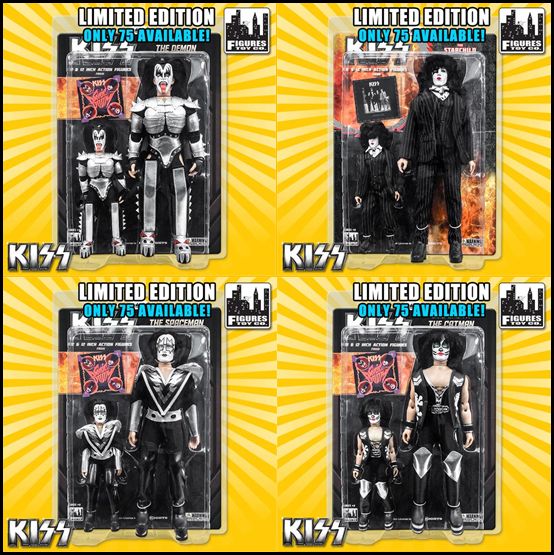 Remember when you were a kid (or possibly an adult) and sometimes you would have 12-inch action figures of certain characters and 8-inch ones for others? What kid would be lucky enough to have a parent who could afford to drop a bunch of cash at once getting one of both at the same time? The predicament would leave you frustrated as to how to play with the toys together, especially if they were from the same franchise. Imagine pitting 8-inch Luke Skywalker against 12-inch Darth Vader. It just didn’t seem to be a fair fight, right?

Figures Toys Company has you covered when it comes to putting on your very own make-believe KISS concerts in 12-inch or 8-inch glory! The toy gurus recently announced three different combo sets of action figures from different eras in the career of the Hottest Band in the Land. You can take your pick of or mix and match different incarnations of the band members dressed in their costumes from the album covers for “Dressed to Kill,” “Sonic Boom,” and “Monster.” There are even a couple bonus variations available of Paul Stanley in a Starchild “Monster” Feather Variant and Gene Simmons as the Demon for a “Hotter Than Hell” Bloody Variant and Demon "Monster" Bloody Edition With Bass Guitars.

Each comes in a combo pack which includes a 12-inch and 8-inch action figure for KISS fans to collect. If you get them all, you could stage your very own KISS ultimate reunion! Imagine Paul and Gene backed up by two Spacemen and Catmen all jamming your favorite tunes. Now if we could only get Bruce Kulick “Revenge” - era, Eric Carr “Fox” Tribute, Mark St. John “Animalize” Tribute, and Vinnie Vincent “Ankh” action figures made we could have the super jam to end all super jams!

KISS fanatics need to act quickly, though. Figures Toys Company only manufactured 75 to 100 of each of these action figures. They all retail at $59 each except the Demon "Monster" Bloody Edition With Bass Guitars, which is an Excelsior Toys exclusive. For more information on how to start Rocking and Rolling All Nite with the KISS Limited Edition 8 and 12-Inch Figure Two-Packs click here.
Newer Post Older Post Home