Review:
What does a mini Tyrannosaurus rex, a giant squid, a steampunk mistress, and Iron Man all have in common with Sherlock Holmes? You can't really think of anything or a way they could mix together? Well, neither could I, until I saw The Asylum's version of Sherlock Holmes. 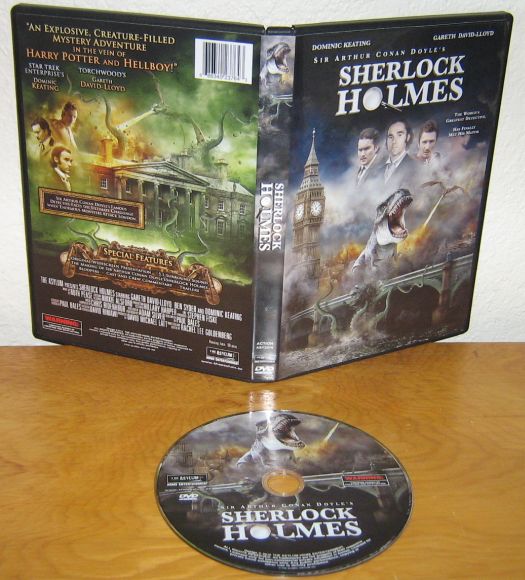 As is usual with The Asylum releases, this came out about three days after Guy Ritchie's Sherlock Holmes. Obviously, it's a completely different animal than the theatrical film. This is a crazy mix of Sherlock Holmes, The League of Extraordinary Gentlemen, and the Wild, Wild West movie with Will Smith. Still not excited?

The cinematography is what I've come to expect. A lot of odd close-up shots during action sequences, sometimes to help keep the special effects budget down. There's a lot of monster point-of-view where the camera barrels through the forest, chasing Holmes and Watson or attacking someone.

The acting is not too bad. First-timer Ben Snyder plays Holmes, and he kind of just literally walks through his part. He walks through the woods, the streets of London, the backalleys of the slums, the seaside, you name it. Other than that, he pretty much relies on Watson (played by Torchwood's Gareth David-Lloyd) to do all his dirty work. That dirty work includes an extremely overlong repelling trip down the side of a cliff which was obviously meant to create tension and put you on the edge of your seat, but ends up taking so long and being so overdramatic you actually start hoping he'll just fall. Surprisingly, David-Lloyd must have gotten paid enough to be in the entire film since he actually figures into almost every scene.

Besides Gareth David-Lloyd, there's another genre-related "big name" actor that is added to the cast to help attract fans to to the movie. They must have really had to push the budget to get two relatively "big" actors in one film. This time, it's Dominic Keating from Enterprise, Beowulf, and Heroes. He plays Sherlock Holmes' brother, who also goes by the name of Spring-Heeled Jack (seeming to have no connection to the character of folklore). No, it's not Mycroft. Apparently another brother we've never heard of who was injured in the line of duty exists and now has a robot / steampunk-looking body that is reminiscient of Iron Man. He barely ever wears the helmet for the suit, but it really does look kind of cool. Of course, it feels like Keating did just enough work to merit him being featured on the cover of the DVD to help promote it.

The special effects and makeup work all look pretty good. It's a little bizarre seeing a mini T-rex running around the London redlight district. The giant octopus tentacles that destroy the ship at the beginning of the movie look strangely similiar to the ones used in Mega Shark VS Giant Octopus.

The "Making-of" featurette was actually pretty cool. It gave me a little more appreciation for The Asylum films. It really does appear that the filmmakers actually care about their little movies. It seems like they're handed a script, told how long they have to shoot (in this case 13 days), and bang out the films with little or no pre-production. The guys that do the makeup and costumes actually put quite a bit of work into their individual tasks for the film.

This flick will fit nicely on SyFy's Saturday night line-up, which is where The Asylum has it custom-fitted for. It's definitely no worse than anything else shown in that time slot. It's crazy, but I actually think these films are fun and look forward to them. My wife, who can't stand B-flicks, even sat through this. That is a living testament alone. (Review by Eric Shirey)
Newer Post Older Post Home