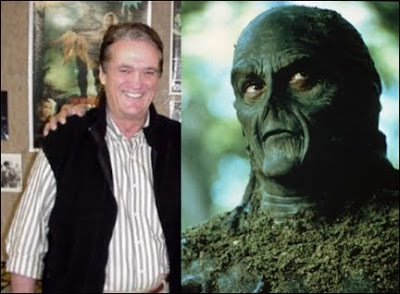 I haven't seen this reported anywhere and I think it's a shame. Veteran actor and stuntman Dick Durock died last week from a long battle with pancreatic cancer at his home in Oak Park, Calif. He was 72.

Durock is best known for the title role in the two movie adaptations of DC Comics' Swamp Thing (1982). The first Swamp Thing movie was directed by horror legend Wes Craven and nominated for a Saturn Award for Best Horror Film in 1983. The sequel to the film, The Return of Swamp Thing (1989), is regarded to be quite campy and cheesy but has become a cult classic. The movies even spawned a TV series in 1990 that Durock played the environmentally-minded super hero monster in for 71 episodes. In a 2008 interview, Durock said that "At the end of the day you're wearing 80 pounds of wet latex plus all the chemicals on your face. It sure isn't sunglasses and autographs, I'll tell ya." His older sister, Judy Schenk, said that "He loved it. He loved doing those crazy things."

Besides Swamp Thing, Durock did stunt work for Star Trek, The Poseidon Adventure, The A-Team, Die Hard: With a Vengeance, The Monster Squad, Ewoks: The Battle for Endor, Buck Rogers in the 25th Century, Conquest of the Planet of the Apes, and many, many more. He also starred in a ton of projects, including Knight Rider, Battlestar Galactica, The Six Million Dollar Man, and The Incredible Hulk. He actually appeared and worked on over 700 films throughout his career.

Here's a little more from the article about the actor's death from the South Bend Tribune website:

Durock was born in South Bend on Jan. 18, 1937, the fourth of five children of David and Sadie Durock. The family lived on the city's south side, in the 3100 block of South Michigan Street, Richard Durock's older sister, Judy Schenk, said. David Durock worked for Studebaker and Sadie Durock was a homemaker.

When Dick Durock was 9, Schenk said, Sadie Durock suffered a cerebral hemorrhage and died, leaving David Durock to care for the couple's children on his own.

Dick Durock remained in South Bend until the age of 13 or 14, his sister said, when he moved with his father and younger sister to New Jersey. There, he finished high school, she said, and then enrolled in the Marines. Later, he moved to Massachusetts, where he stayed for a time with his older sister, Mitzi Varrichione, and her husband, Frank Varrichione, a Notre Dame graduate and member of the Pittsburgh Steelers football team.

In the early 1960s, Frank Varrichione was traded to the Los Angeles Rams, Schenk said, and he and Mitzi Varrichione moved west. Dick Durock soon followed, she said, and before long began getting work as a Hollywood stuntman.